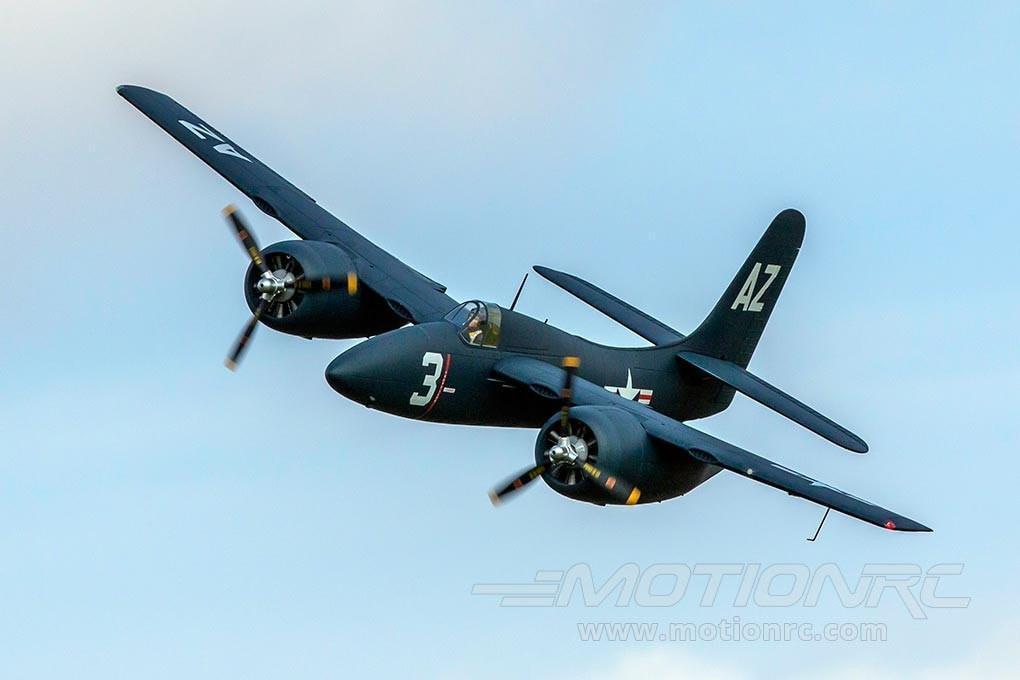 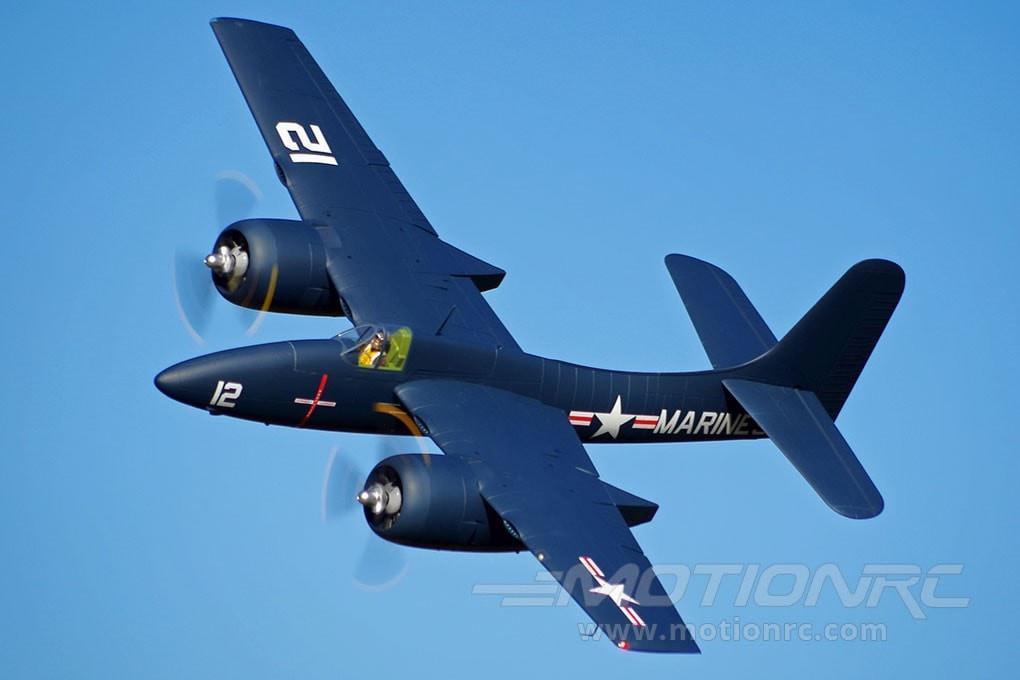 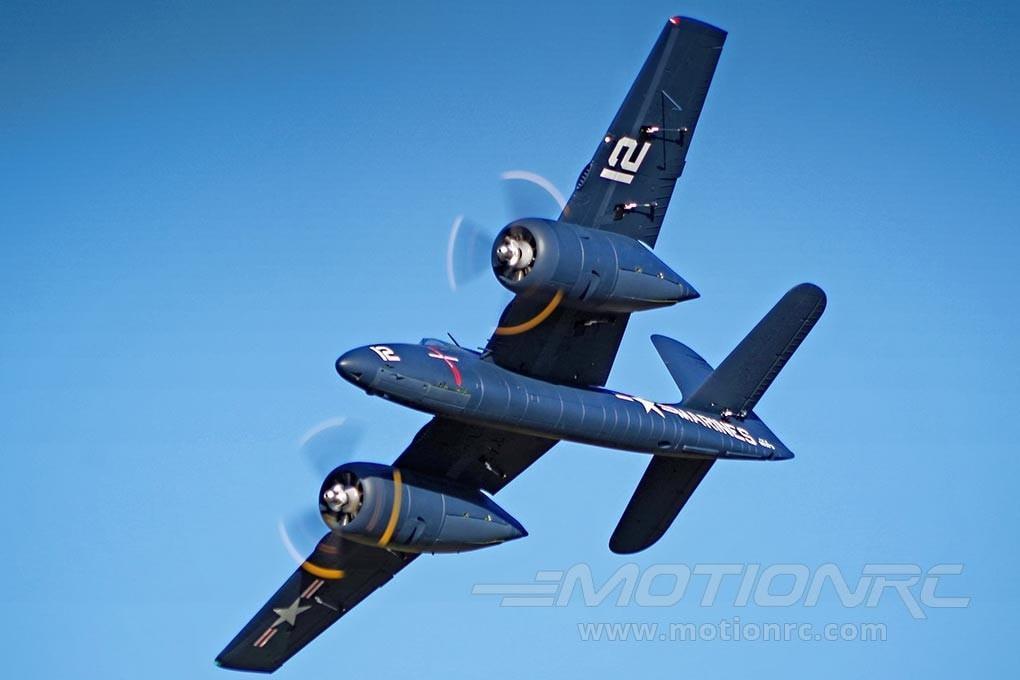 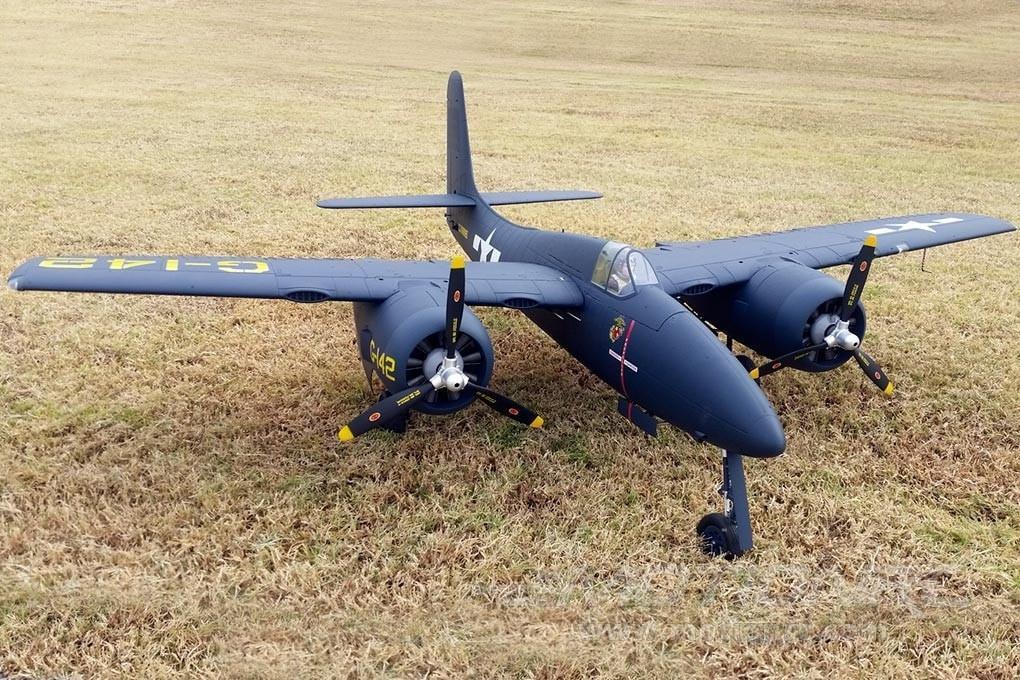 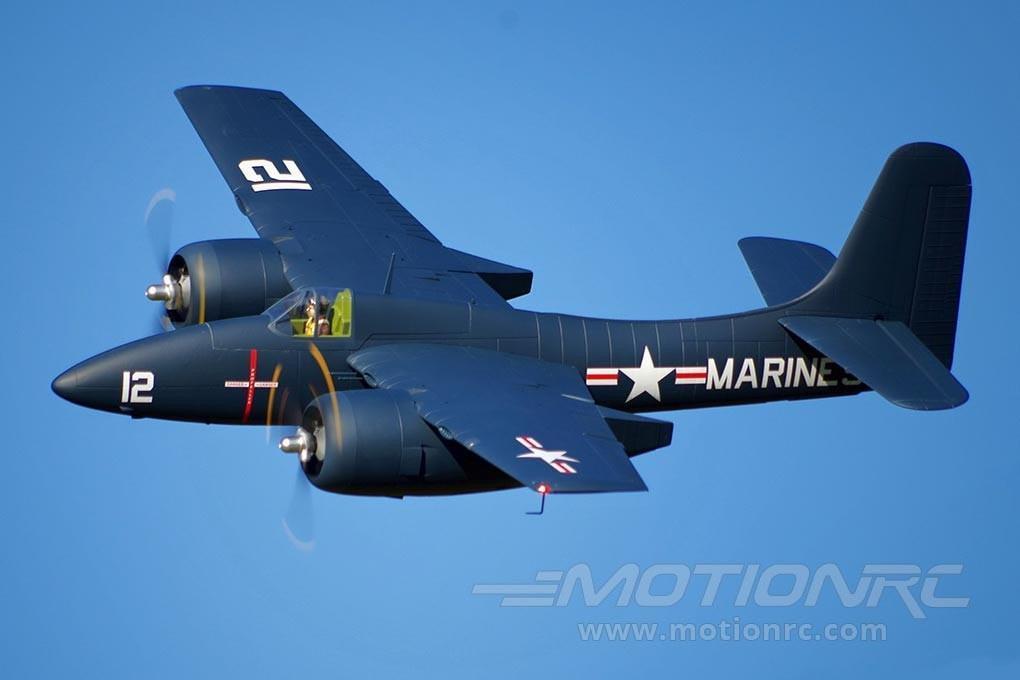 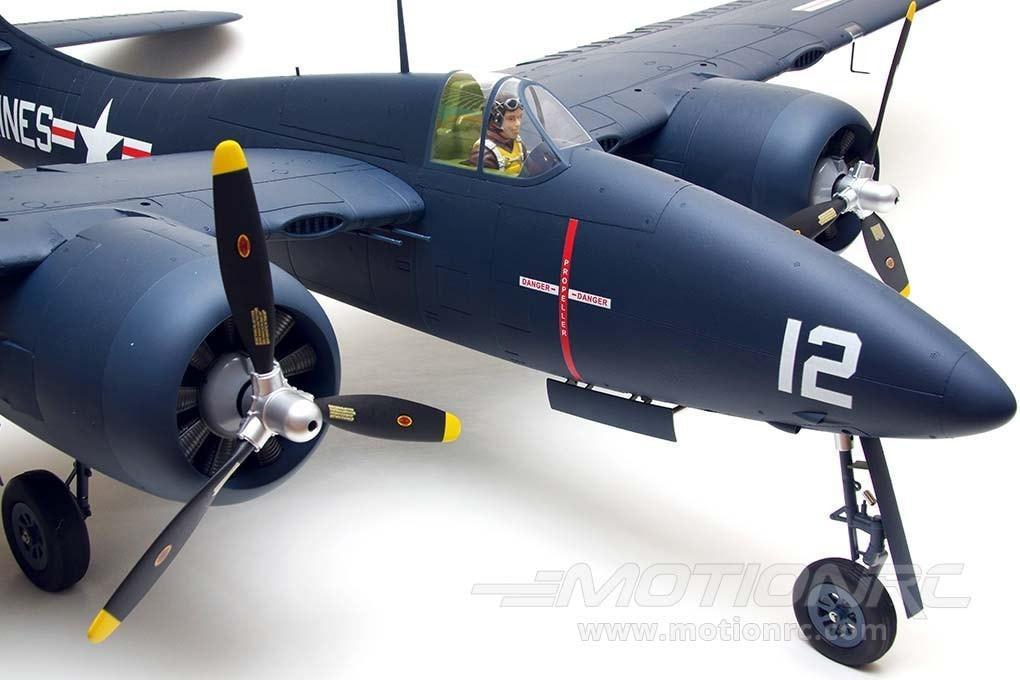 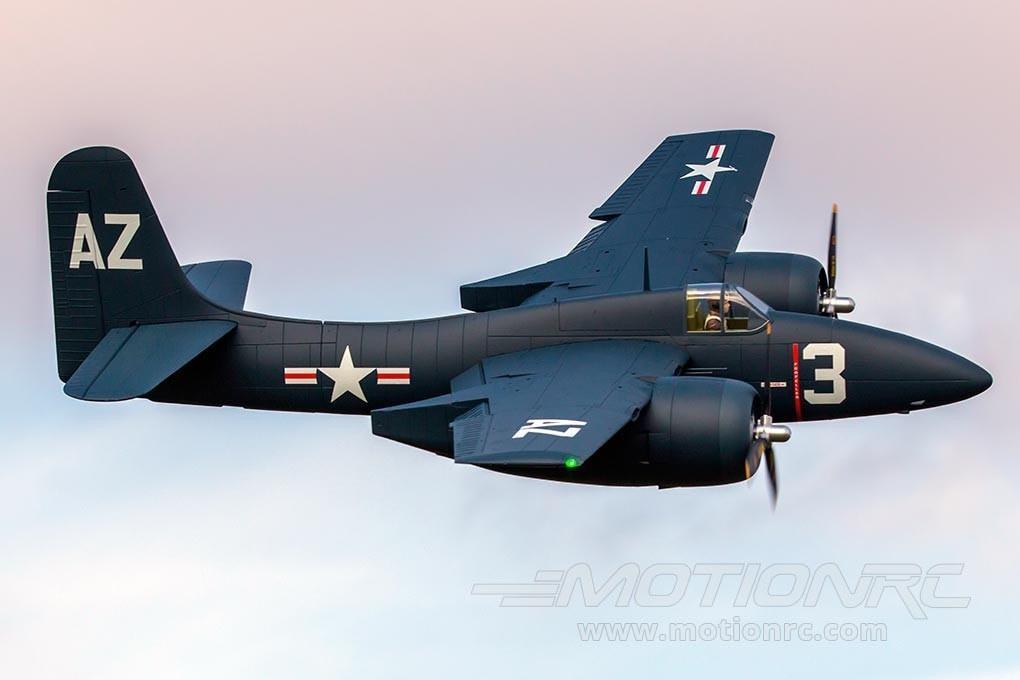 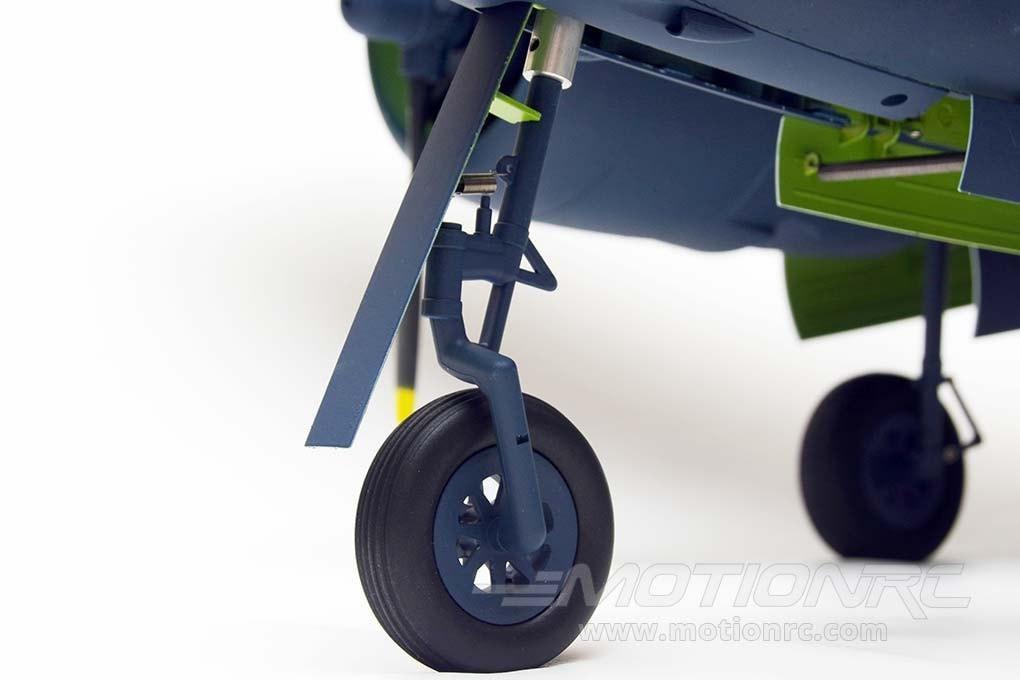 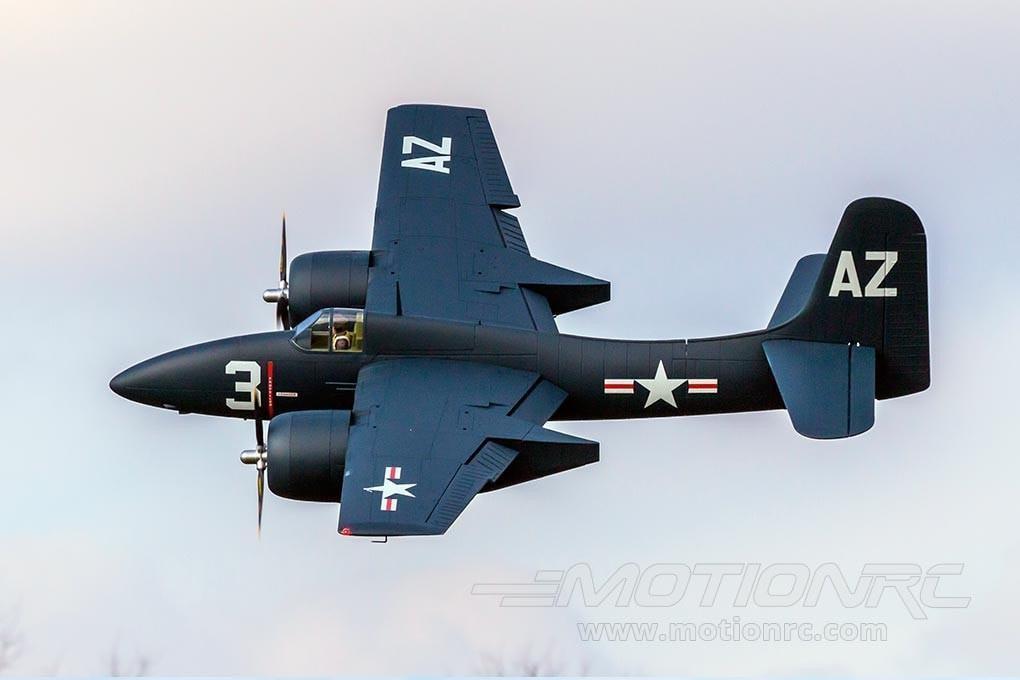 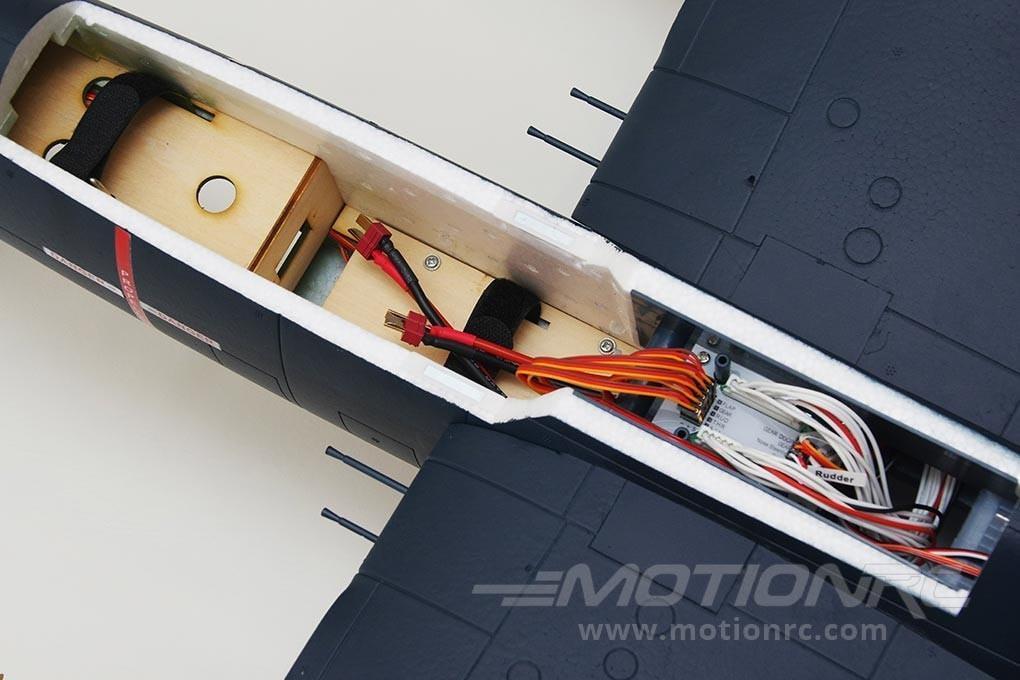 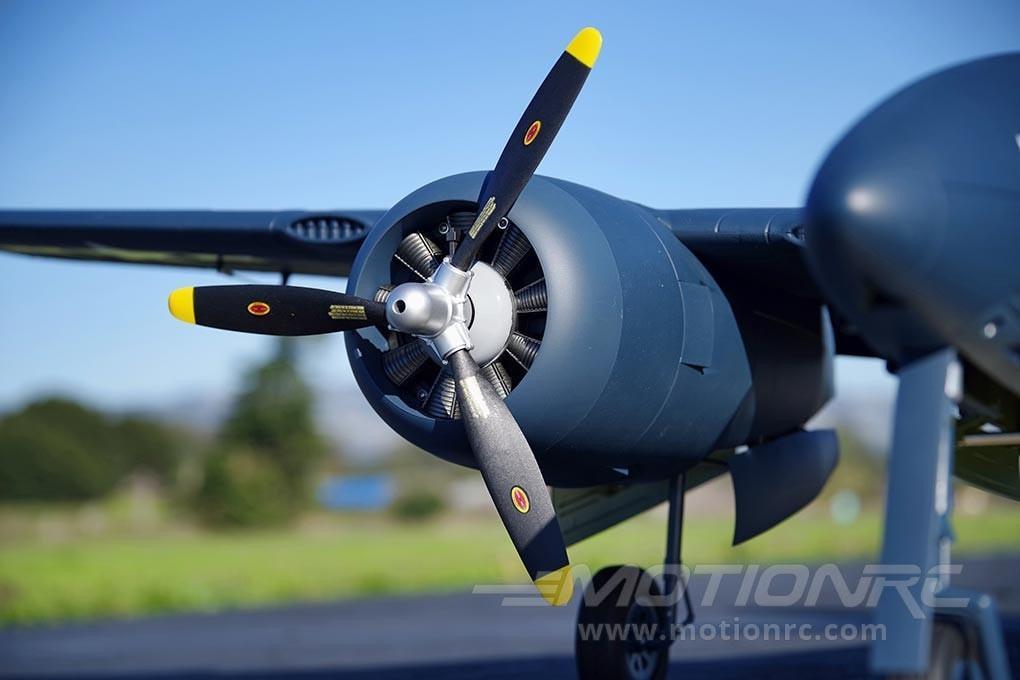 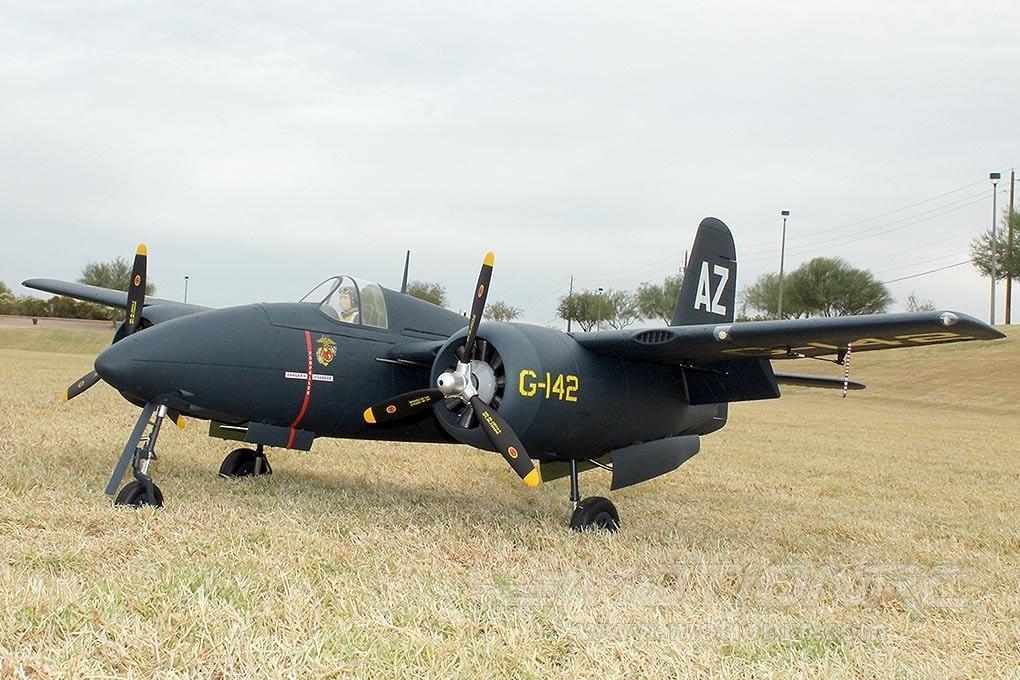 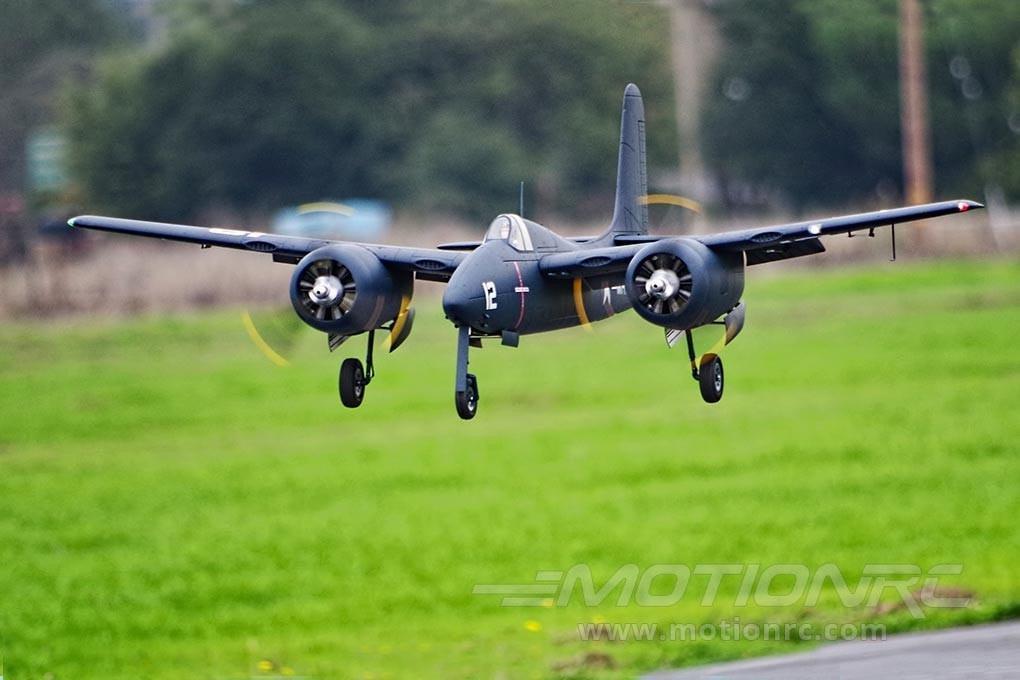 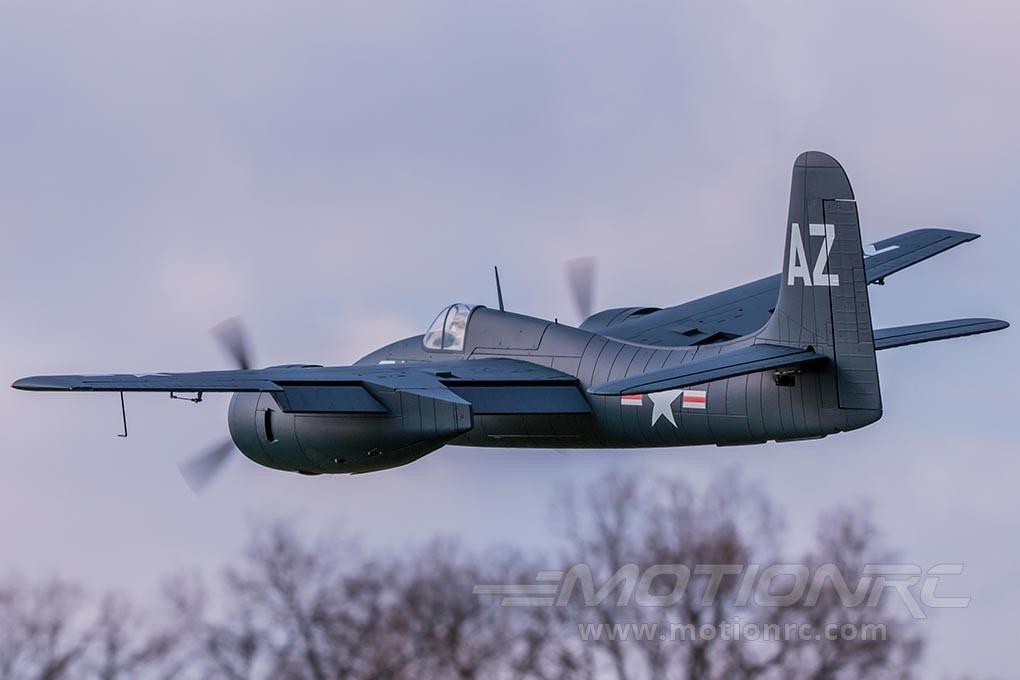 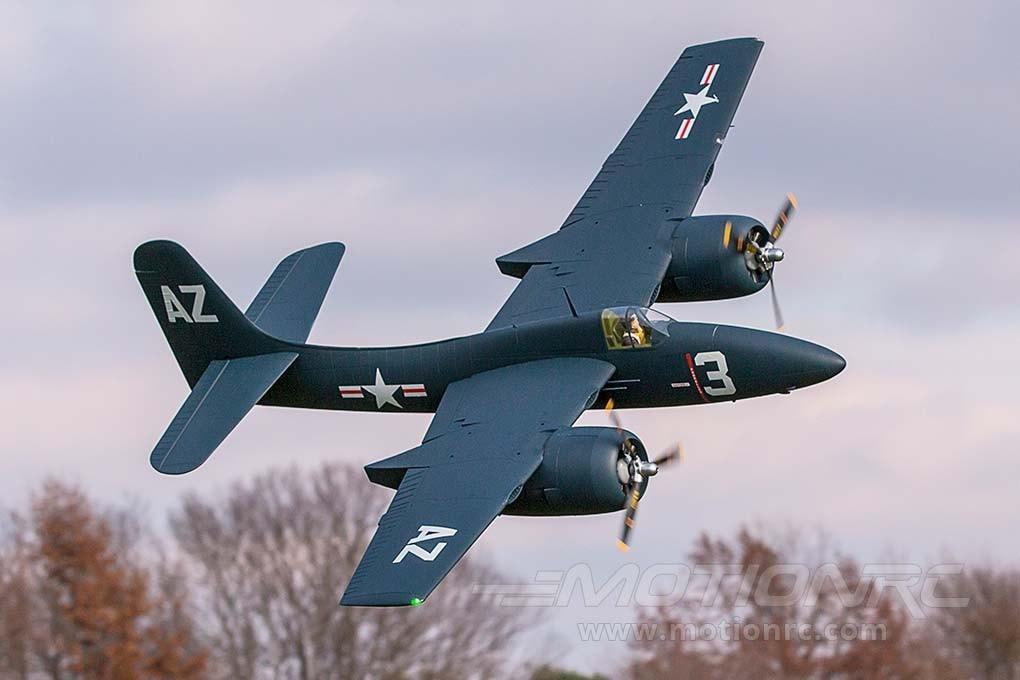 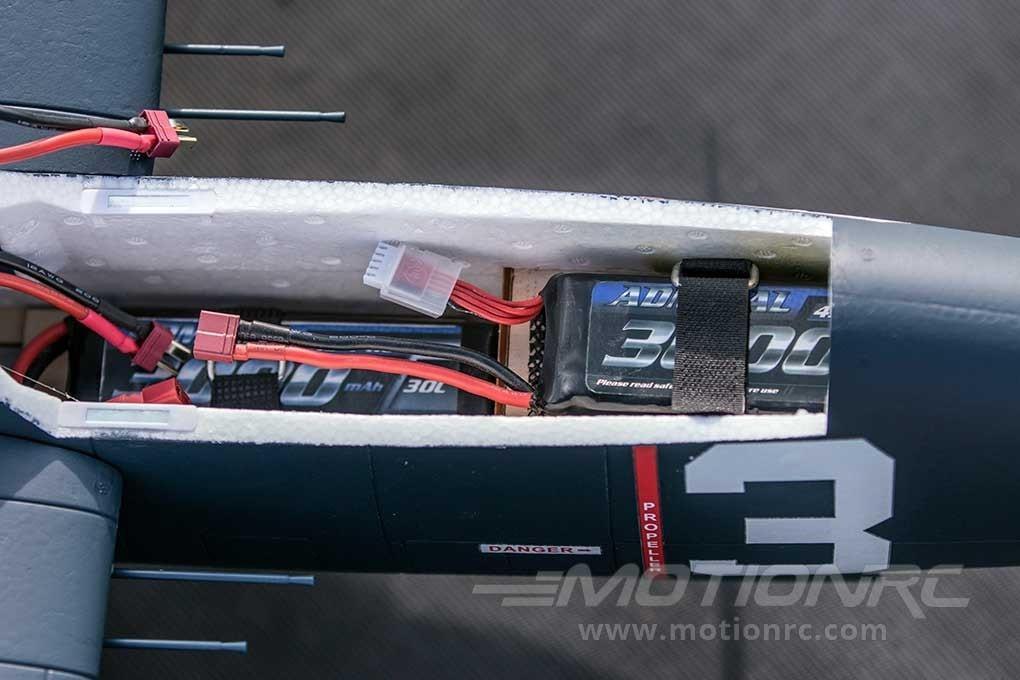 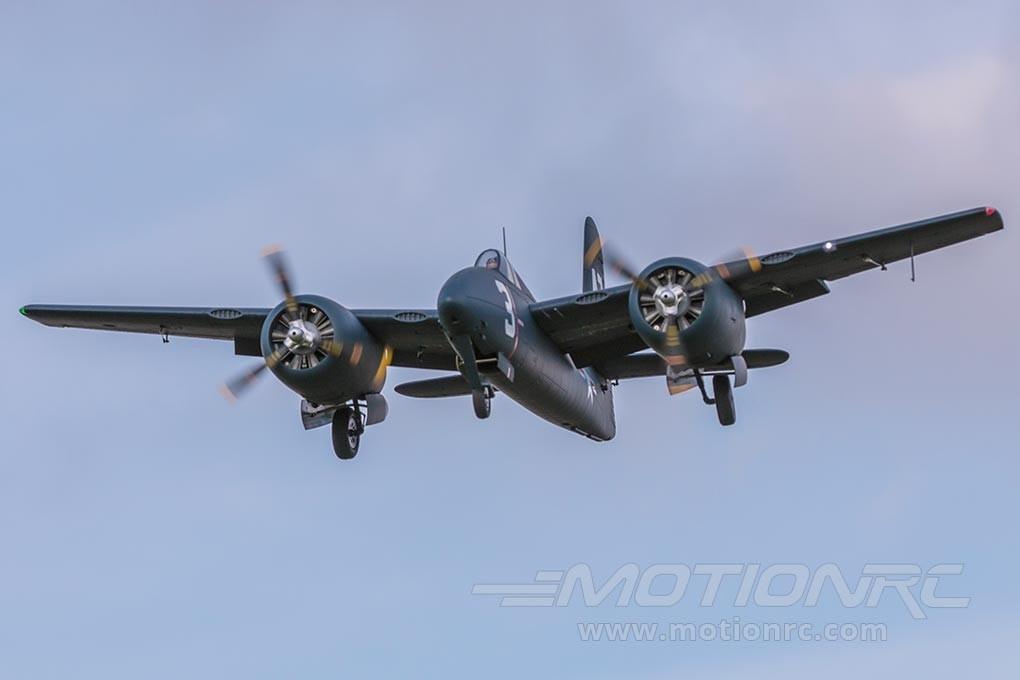 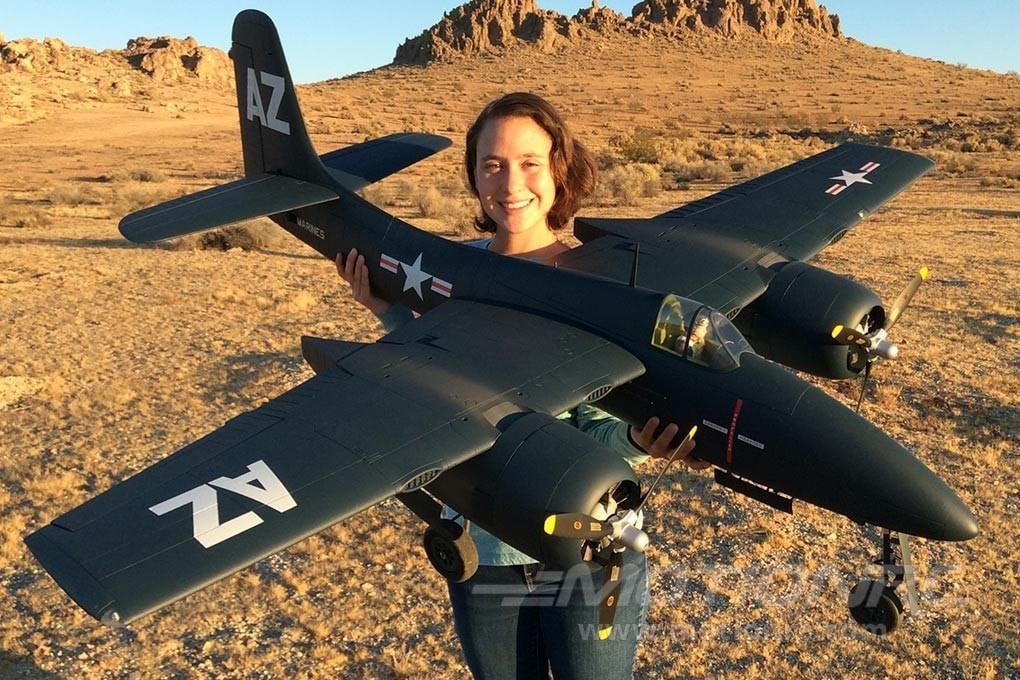 ***This item has been assembled by as for demostration reasons and we sell it as is also has the upgraded aluminium struts. The Grumman F7F Tigercat is a twin piston engine aircraft developed during World War II. Originally envisioned as a carrier-based naval fighter, the Tigercat underwent several iterations and was later optimized for a variety of roles. Although World War II ended before it became fully combat operational, many variants of the Tigercat went on to serve in the Korean War in capacities including as a night fighter, ground attack platform, and a dependable reconnaissance platform.

Design - Meticulously designed to incorporate EPO foam, wood, plastic, and carbon reinforcements, our design is easy to assemble and maintain, and delivers the strength and power to satisfy any RC airplane pilot. The main wing halves, horizontal stabilizer, and two engine nacelles each install with four screws. A new pliable ribbon wiring harness simplifies each wing connection to one instead of five. The antenna and gun barrels are also designed to easily slide out to prevent damage during transport. A plastic nose cone, cowls, and doors are designed for longevity. The generously sized battery bay can accommodate your batteries, receiver, and optional gyro in a cleanly organized layout. To ensure a secure fit, the cockpit of this FlightLine F7F-3 Tigercat is held on by both magnets and a sliding latch. The FlightLine F7F-3 Tigercat arrives with dependable electronics pre-installed, and every servo in the aircraft is a Digital Metal Gear servo. The aircraft uses our DayBright 3W LEDs for visibility. Static wingtip lights remain on, and the single landing light turns on only when the landing gear is down, for ultimate realism like the full scale aircraft. Four sets of adhesive vinyl decals are also included in the box. Choose from these decals or recreate your own historic livery as you wish!

Performance - The F7F-3’s generous main wing area allows a short takeoff distance of 15-20 meters, and its 70mm diameter nose wheel and 80mm diameter main wheels and thick steel struts are excellent for operating on typical grass airfields. An optional aluminum compression strut upgrade is available for rougher grass conditions. The Tigercat’s tricycle landing gear reduces the risk of tipping forward after landing and makes taxing on the ground very stable. Four flaps slow the aircraft for controlled power on landings at low speed. For efficient power, the aircraft features a pair of 3748-600kv brushless motors, 3-blade 12x7 propellers (Standard and Reverse rotation), and two 60A ESCs. The model’s top speed is 125kph/78mph, and comfortable flight duration ranges between 6 and 7 minutes on a pair of 4s 3000mAh lipo batteries. For even faster speeds approaching 155kph/97mph and extended vertical performance, an optional Sport Power System utilizing 3648-880kv motors and 2-Blade 12x8 propellers is available for separate purchase. Click the Upgrades tab above for more details.