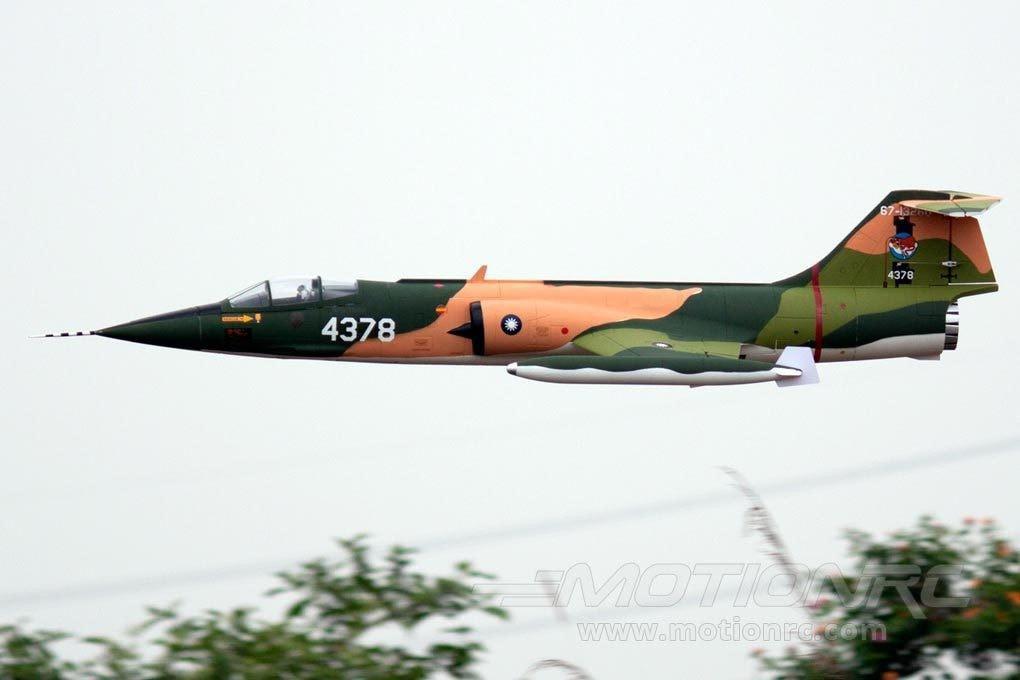 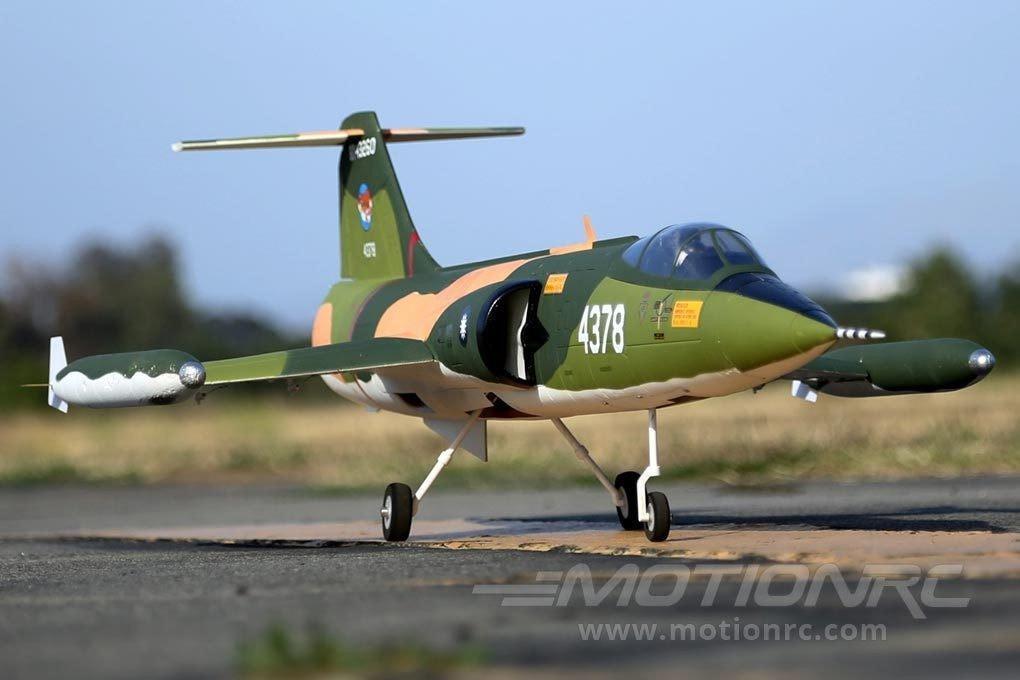 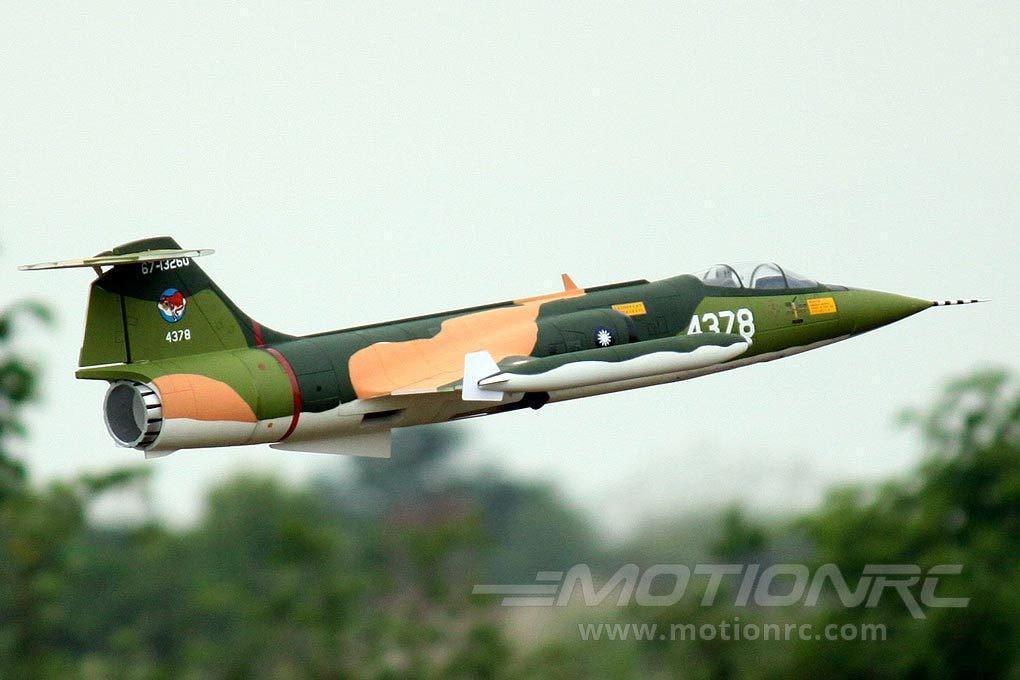 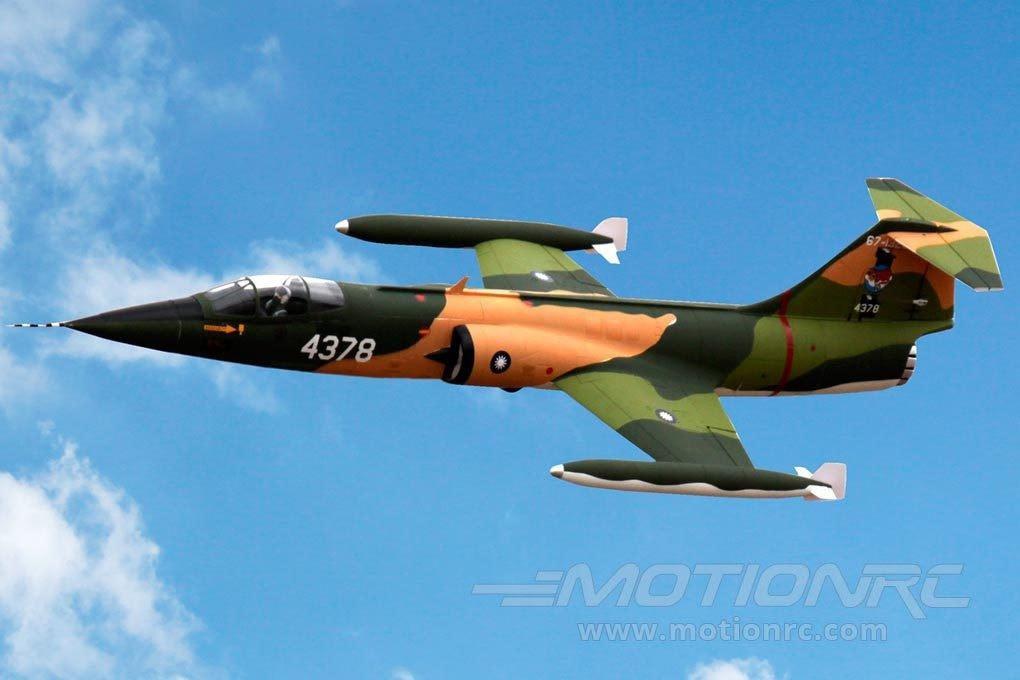 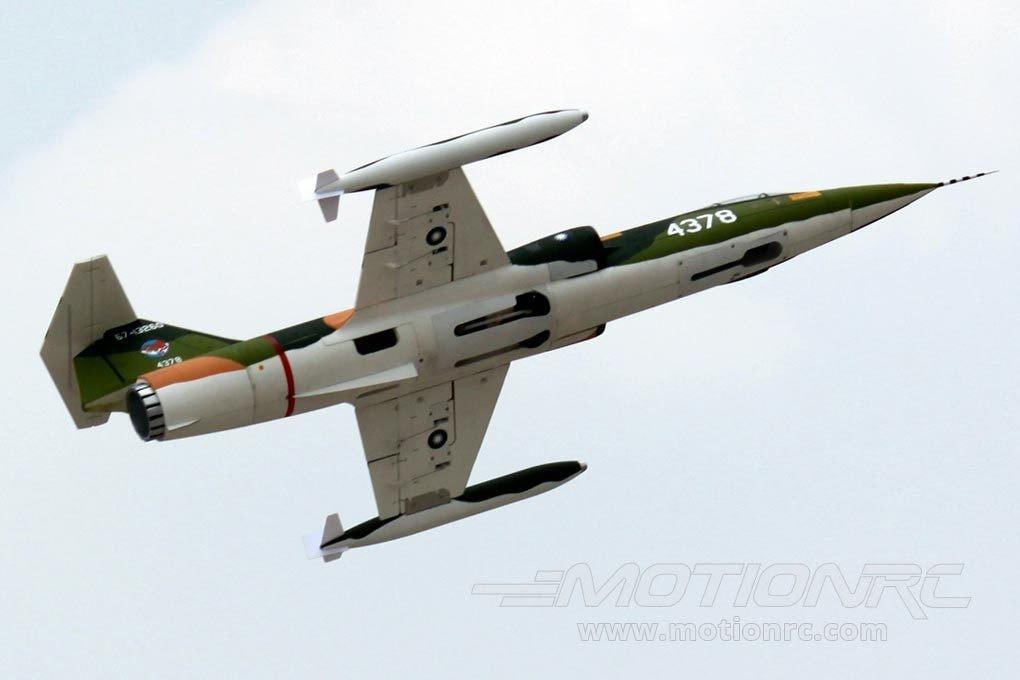 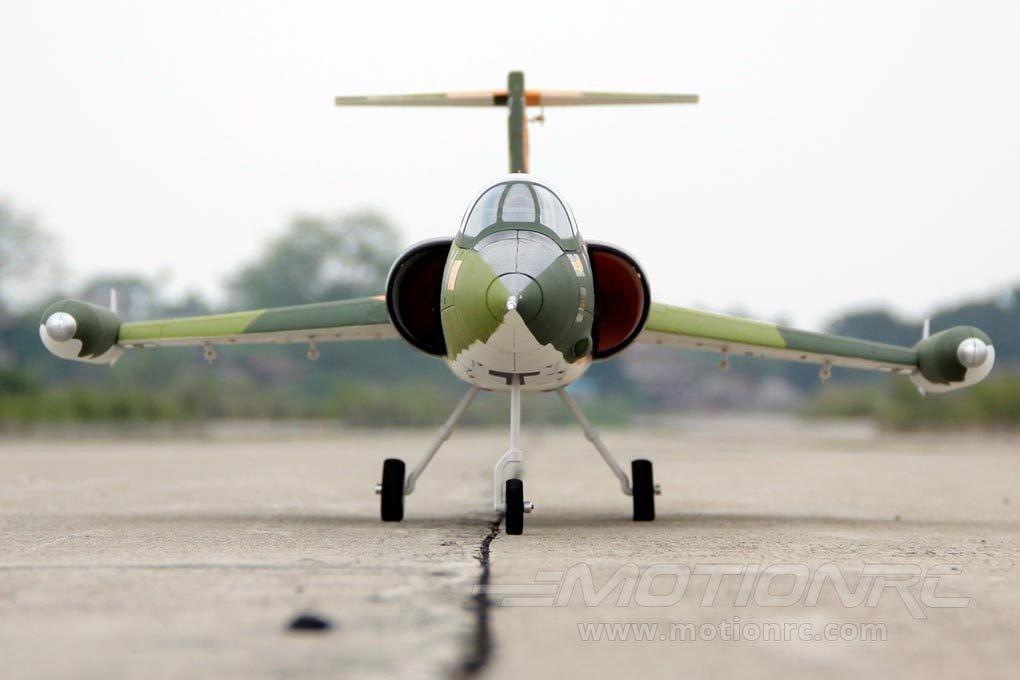 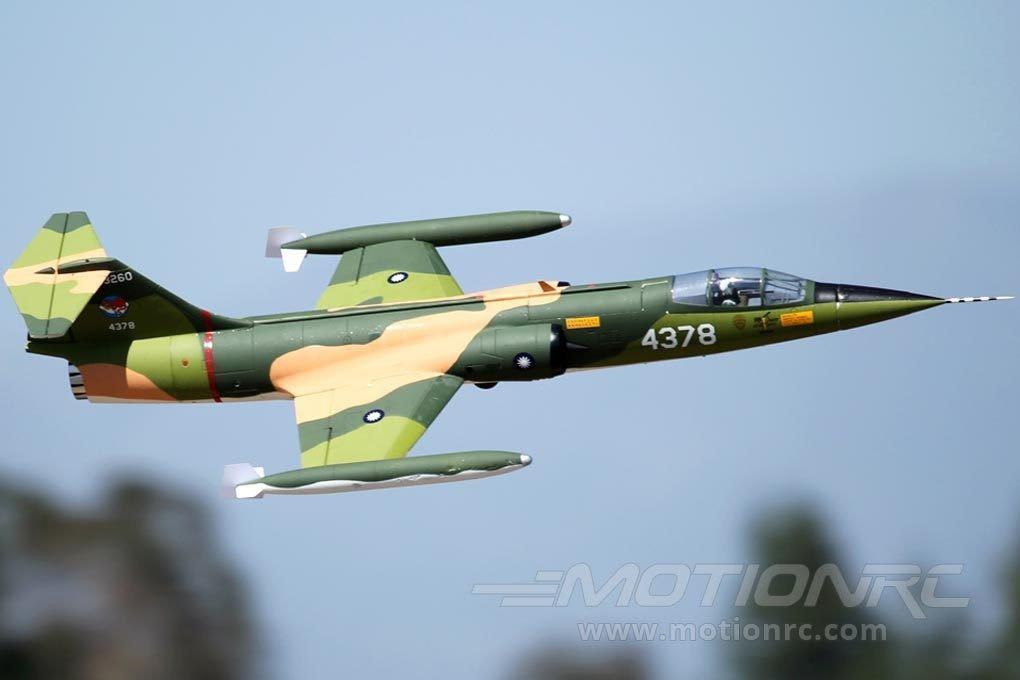 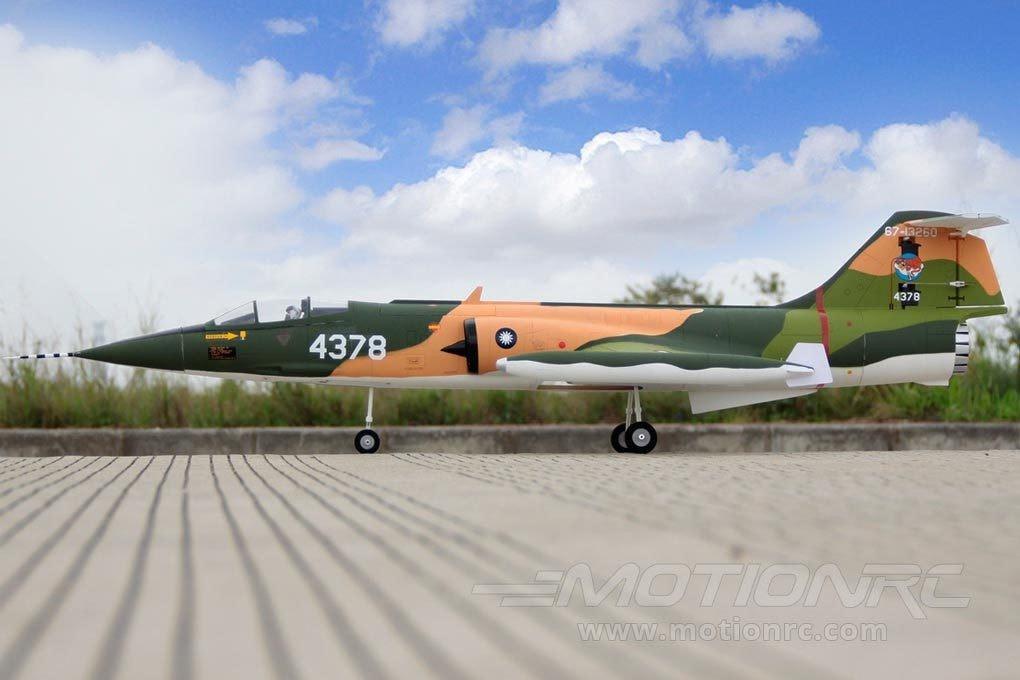 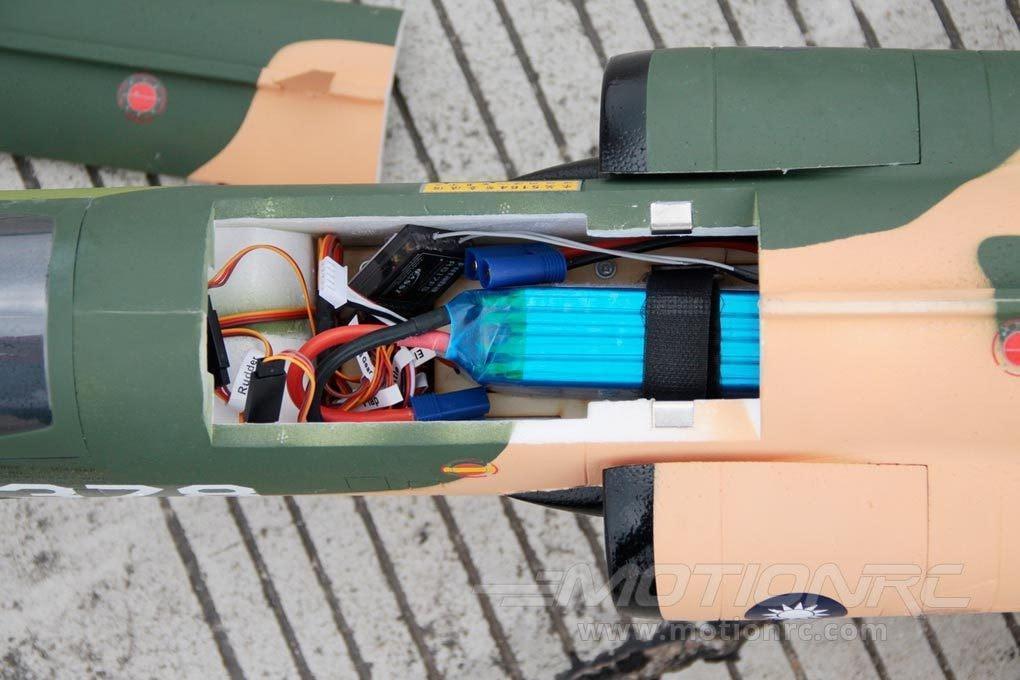 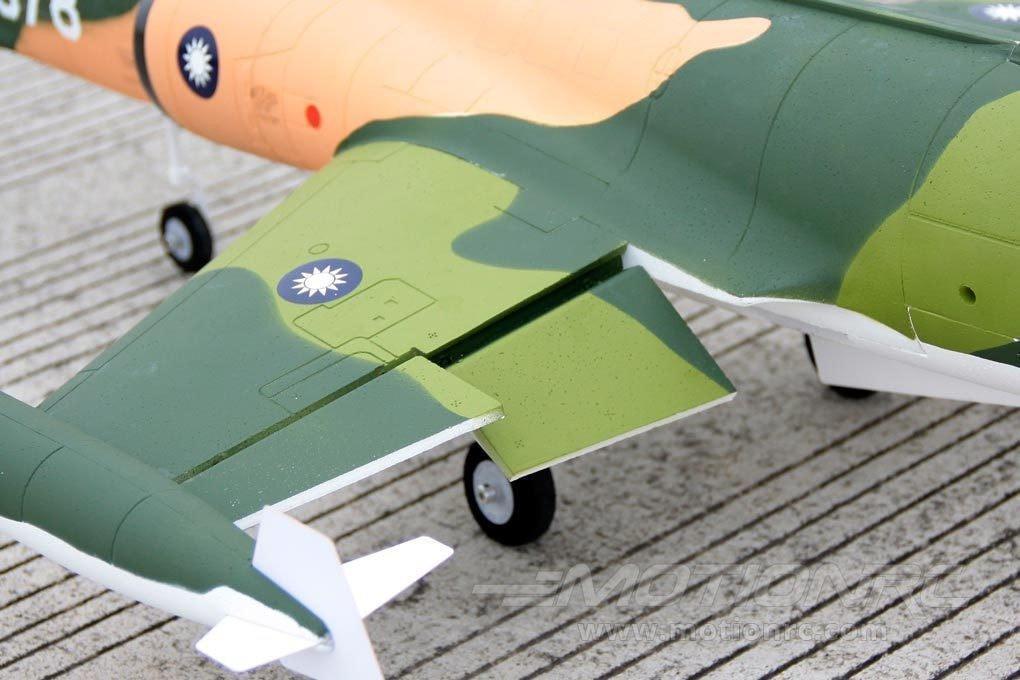 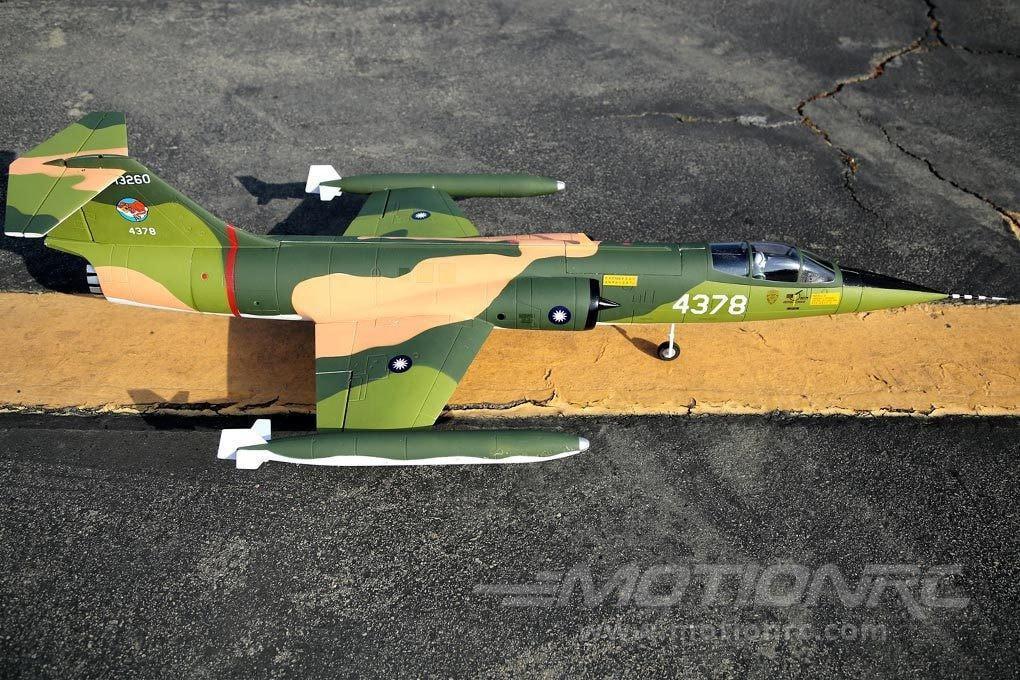 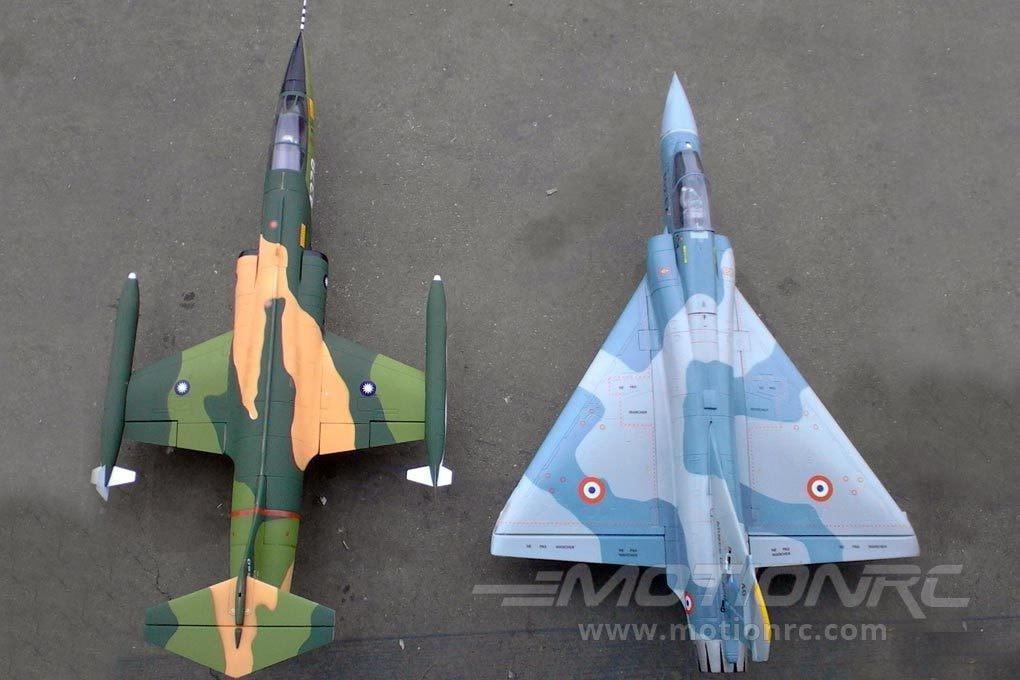 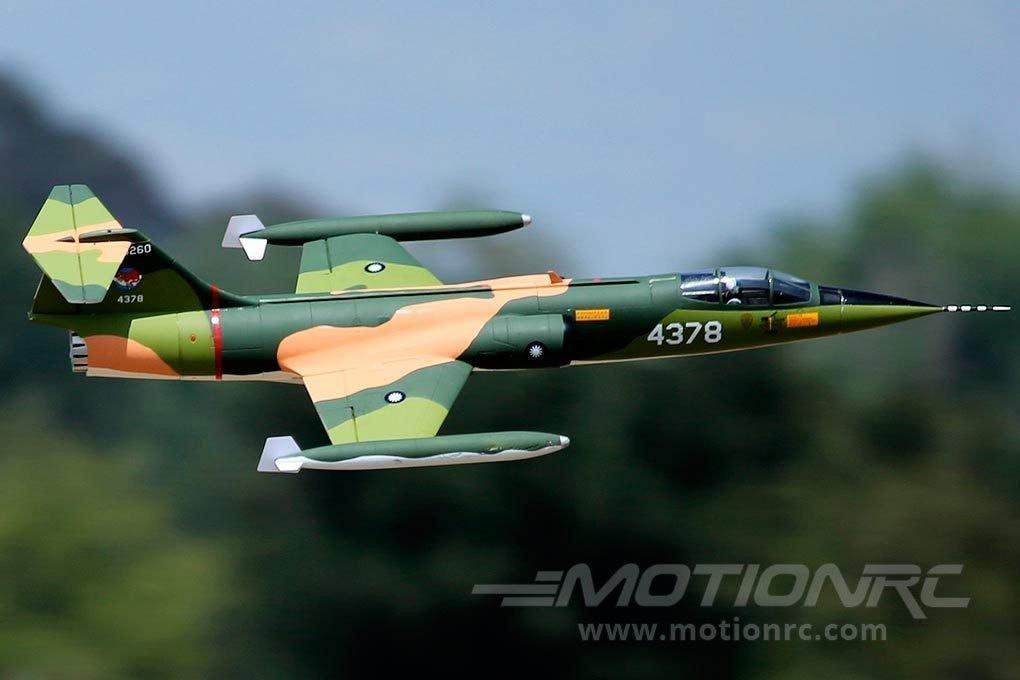 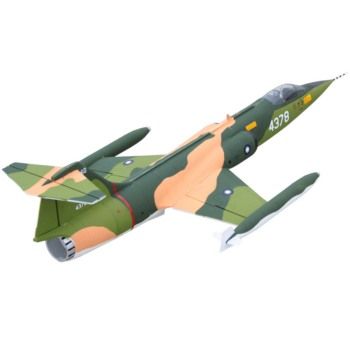 Looking for something different for your EDF fleet? Introducing Freewing’s 70mm F-104 Starfighter! Own a piece of aviation history with this sleek and storied interceptor, the “Man in a Missile”!

This aircraft is quite a surprise at the flying field because it flies much more stable than it appears it can. Onlookers will swear that it cannot fly slowly due to the F-104’s iconic stubby wings, but in fact Freewing has optimized their RC rendition to handle gently at a wide flight envelope while remaining as true to scale appearance as possible. The key to its performance is its very low weight, optimized airfoil, and economical power system. A new 70mm 6s 12 blade power system mated with a Hobbywing 60A ESC provides lightweight and efficient power with a 6s 4000mAH battery. The result is an aircraft which can reach top speeds of 90mph, land at 20mph, and fly for four minutes with mixed throttle, while still including the creature comforts we’ve come to expect from Freewing jets like standard flaps and electric retracts.

The 70mm F-104’s size puts it in similar company with Freewing’s 80mm jets, and borrows some of that classes’ features while simplifying on others appropriate for the pricepoint. The magnetic nose cone reduces the long fuselage by nearly 9.5” for easy transport. The wings are removable with screws also, and there is enough slack in the wiring to clear the short carbon spar in the wing. The fuel tank on each wing tip is secured with a sliding plate and two screws for a secure fit. The model flies faster without the fuel tanks, but visibility can become a challenge! There is space under the wooden battery tray to fit a gyro such as the Eagle A3-L, for pilots wanting the added assistance of digital flight stabilization.

We did find that the F-104 is best suited for paved surfaces. The main and nose wheels are 45mm and 35mm, respectively, and the 3mm steel wire struts with metal trunnions are sheathed in plastic like Freewing’s A-10 Warthog. The result is a lightweight landing gear setup which can easily be bent back to shape in the event of a hard landing, but not one which would perform well on taller grass. If operation over tall grass is unavoidable, we recommend hand tossing instead of a traditional rolling takeoff. The wing’s slight anhedral allows the model to skid along its belly and wingtip tanks for stable landings. The model’s EPO foam construction opens up the possibility of fiberglassing directly onto the surface to add strength, durability, and additional customization for pilots wanting to upgrade or customize their F-104.

For pilots who have flown other aircraft in Freewing's 80mm Jet Series, the F-104’s visibility difficulty is similar to the Mirage, while the F-104’s stability is similar to the F-5 or Super Scorpion. Its length can be deceptive; despite being longer than the F-86, the F-104’s wingspan is narrower than the Mirage’s. It truly is a missile with wings! The four tone SEA (“South East Asia”) camouflage color scheme is very easy to see against a blue sky. The solid underside contrasts with the camouflage topside to orient the model during distant maneuvers. The F-104 is optimized to fly our Admiral 6s 4000mAh lipo battery with an EC5 connector. We do not recommend using a larger or heavier battery, for CG and weight concerns. Pre-installed electronics and minimal assembly limits build time to 1-2 hours. The Freewing 70mm F-104 Starfighter is recommended for Intermediate to Advanced pilots only. We recommend that pilots have competent experience with at least two prior EDF jets of this size.