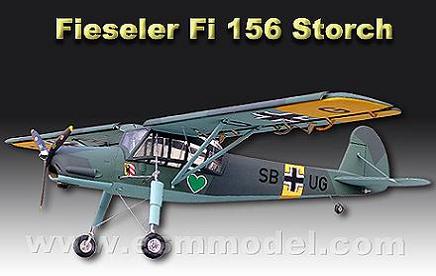 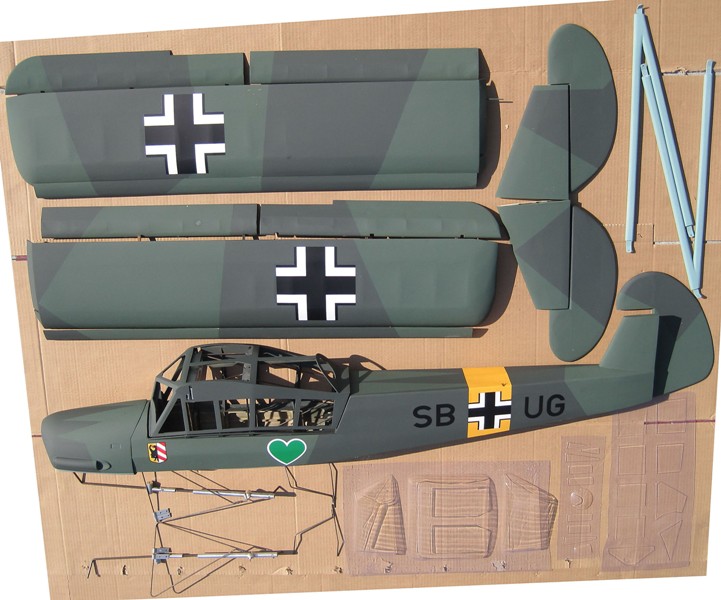 History: The fabric-covered Storch observation monoplane served the German Forces throughout World War Two ver the Germans saw combat. With ten times the life expectancy of the Bf 109 fighter, the Storch ("Stork") proved to be a rugged Short Take Off and Landing (STOL) airplane that gained the respect of all its pilots.

The Storch was first flown in 1936. Using a fixed slat over the leading edge of the wing and slotted camber-changing flaps along the trailing edge, the Storch achieved incredible short take-off performance. In a light breeze the Storch could take off in just 200 feet (60 meters) and land in about 66 feet (20 meters). It had a crew of three, and with extensive windows surrounding the occupants, made an excellent observation and liaison aircraft. Production for the German armed forces began with the Fi -1. The Fi , which had the rear glazing raised to accommodate a machine gun for defense, soon replaced the A-1. Other variants included a tropical version with dust filters, an ambulance version carrying a single stretcher, and an enlarged version (Fi 256) with seating for five built in limited numbers in France between 1943 and 1944. Fieseler began building the Storch in Germany, but was soon forced to move production to Morane-Saulnier in France (as the M.S.500 Criquet) and Mraz in Czechoslovakia (as the K-65 Cap). This was done to make room for the BF 109 at the Fieseler plant.

The Fieseler Storch was the last dogfight victim of the western front. Pilot Duanes Francies and his observer, Lieutenant William Martin, of the 5th US Army Division, spotted a Storch circling below them while looking for ground targets in their Piper Cub. Diving on the Storch, the two men opened fire with their Colt .45s and the plane spiraled to the ground. After a short gun battle, Francies and his observer took the two Germans into custody. Lt. Martin was awarded the Air Medal for his part in the fight, but Francies would have to wait until the story was reported in Cornelius Ryan's book "The Last Battle," to finally be awarded the Distinguished Flying Cross. The USAF was 22 years late. Apart from being the last Luftwaffe plane lost in the west, this Storch was also the only enemy plane downed by pistol fire during the war.

After the war Morane-Saulnier continued to produce the Storch as the M.S.500, and Mraz continued to build the K-65 Cap. Over 2,900 Fi 156s were produced. Today, more than 30 Fi 156s and their brethren have survived in Europe and North America, and about 20 are still capable of flying today