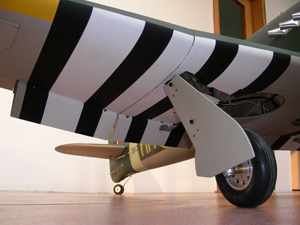 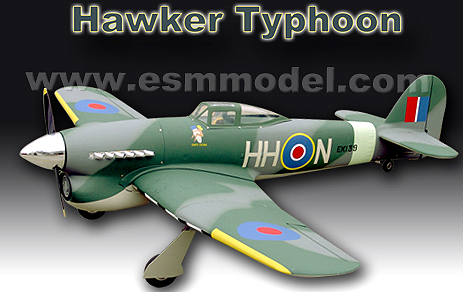 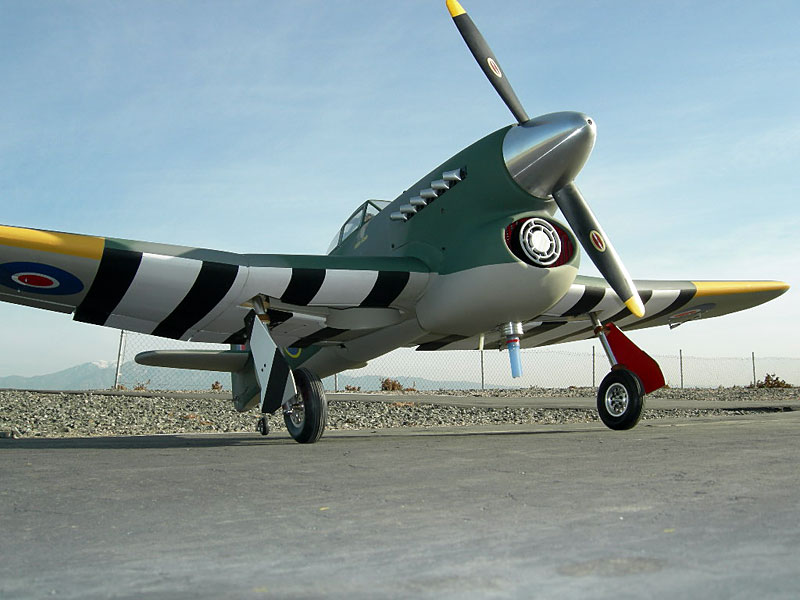 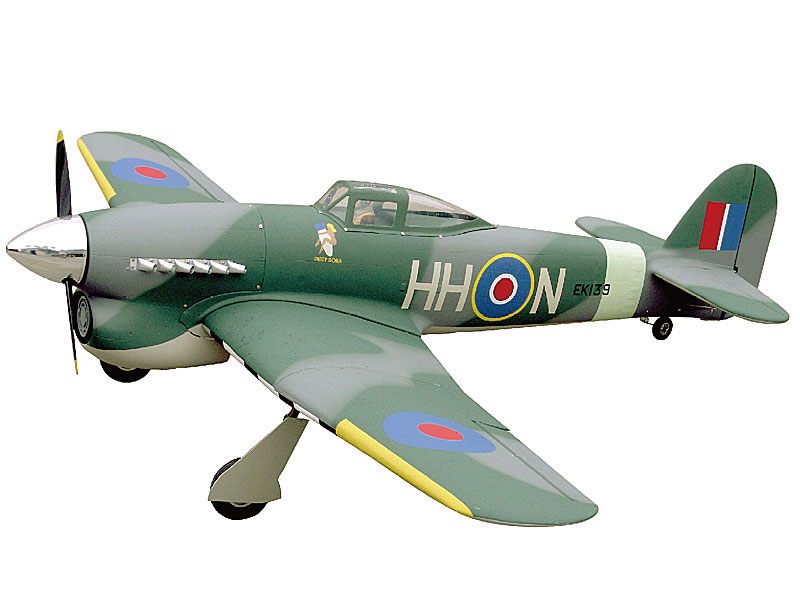 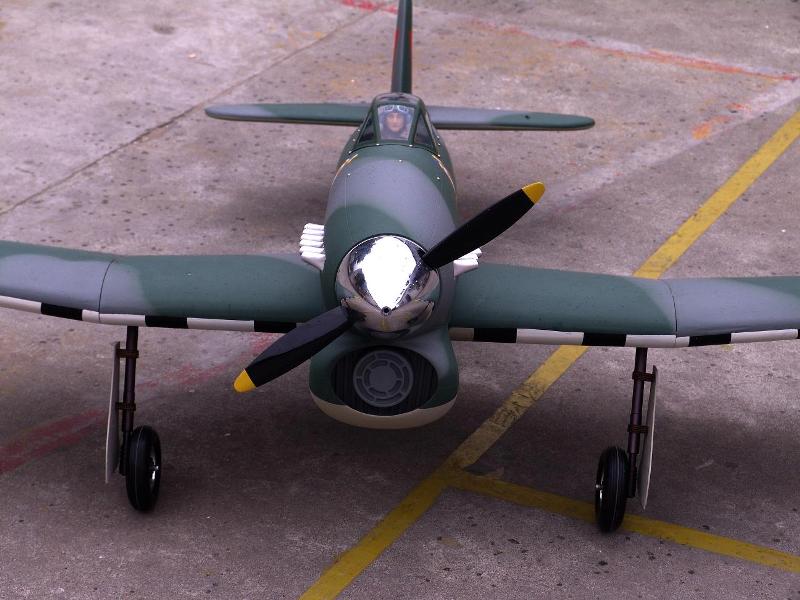 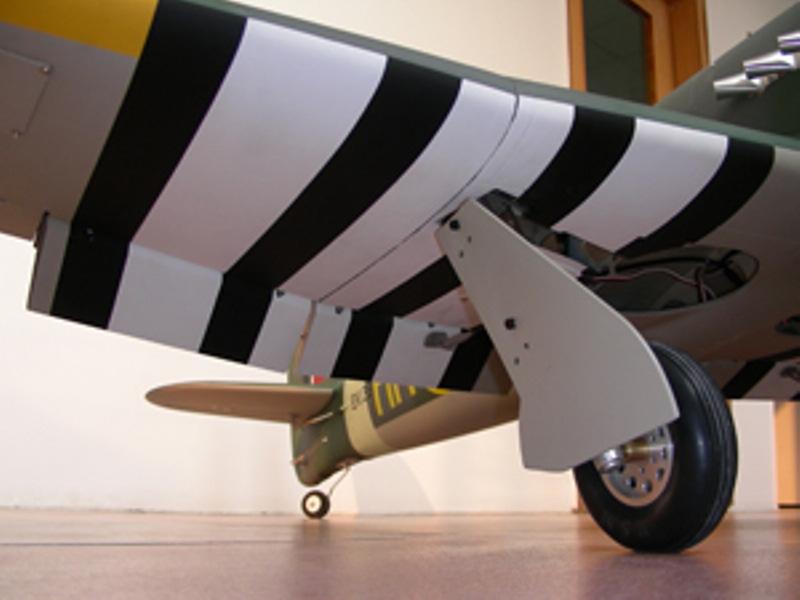 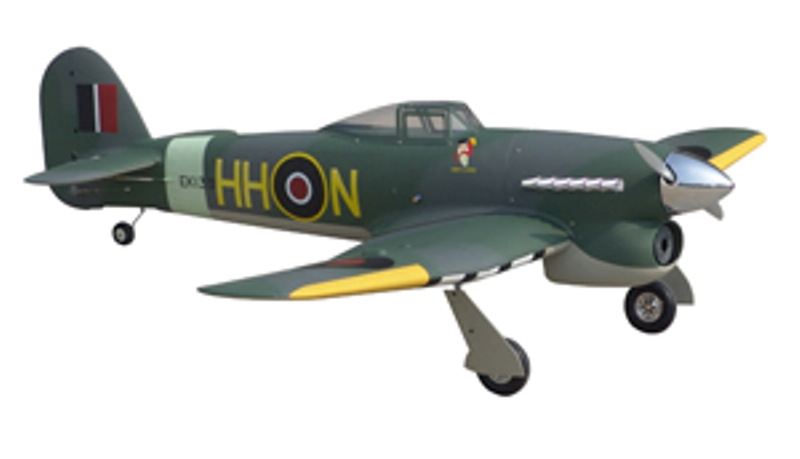 Special Note:
When most models are made, most companies typically stretch the nose further forward than it is on the original aircraft. This is especially true on full scale aircraft with very large nose mounted engines ( the Typhoon). They essentially sacrifice the scale look of a model for needing to add less nose weight to balance it. Our aircraft are designed to be very accurate in outline, and it is not unusual on most of our aircraft line to take a pound or more of noseweight. In the case of the typhoon, the original had a very short nose, with a massive engine, which means that for our model to maintain the scale outline you will have to add a significant amount of noseweight, often more than 3 lbs.

About the Hawker Typhoon
The Hawker Typhoon (affectionate known as the "Tiffie") was initially intended as a dedicated interceptor and set to succeed the 1930's-era Hawker Hurricane and was first drawn up in 1937. The system was designed to a British Air Ministry specification (Specification F.18/37) calling for such an aircraft to accept the new line of Rolls-Royce and Napier 2,000 horsepower engines. The Typhoon was predicted to do just that thanks to the promising Napier 24-cylinder, liquid-cooled 2,000-plus horsepower Sabre engine ed for the airframe. At least on paper, the Typhoon would have given even the fabled Supermarine Spitfire and its legendary Rolls-Royce Merlin engine a run for its money but history would prove otherwise and set the Typhoon on a different course altogether.

As promising as the all-new aircraft was, initial development revealed several key issues with the design, especially of the fuselage construction and the new Sabre engine. First flight was achieved in February of 1940. On May 9th, 1940, a prototype Typhoon recorded a devastating failure of the fuselage at the base of the empennage, just aft of the cockpit, while the Sabre engine suffered many-a-teething problem. The situation became quite complicated to the point that the future of the Typhoon was in jeopardy and the Air Ministry was looking to cancel the project altogether in favor of purchasing American-made Republic P-47 Thunderbolts instead. Only the arrival of the Focke-Wulf 190 "Wurger" series fighter in September of 1941 helped to fuel the Typhoon project as a viable contender to the elusive high-performing German fighter.

Once fielded in August of 1941, the Typhoon met with mixed results. It became the RAF's first 400 mile-per-hour fighter on one hand but on the other, the Napier engine - despite its power - proved quite complex and needed much attention while still being prone to failures in the field. Such was the desire to "make it happen" that the powerplant was debuted before it should have been made officially ready on any platform. The price paid for pure speed was off-set by the aircrafts generally poor rate-of-climb. Additionally, despite being designed as a high-altitude performance interceptor, the Typhoon performed quite poorly at height above medium altitude and surprisingly proved its worth in low to -altitude sorties instead. In this way, the Typhoon actually fared better in the role than the Supermarine Spitfire.

As a result, Typhoons became more and more relegated to this role and armed for more conventional ground strike capabilities than intended. The Typhoon could engage ground targets and still offer up competing performance when tangling with German bombers and fighters at this level. More importantly, the marauding Fw-190 low-level attacks across the southern British coast were finally answered with the arrival of the Typhoon as the fighter-bomber proved adept at engaging these small German aircraft on their own terms at their optimal operating altitude. The structural deficiency in the tail design also led to delays and some unfortunate fatalities though this was later addressed temporarily through the use of reinforcement via twenty alloy riveted "fishplates" at the empennage base.